At Inser we have sperm bank service, which facilitates the freezing of the spermatozoa in medium and long term to facilitate the future paternity in patients with diverse illnesses or difficulties in their fertility. 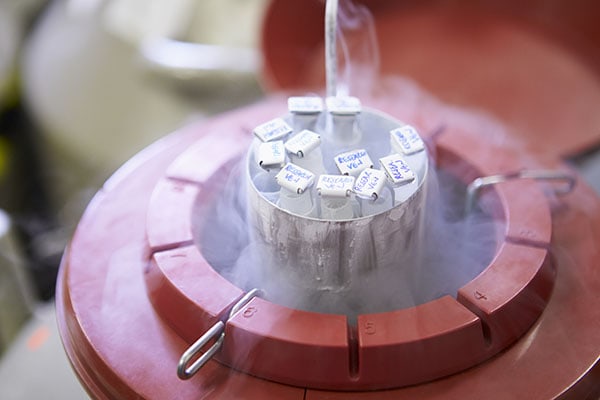 What is the Sperm Bank service?

It is the procedure by which the sample of seminal fluid is processed by exposing the spermatozoa (gametes) at very low temperatures to slow down the cellular biological processes.

These samples can be stored for long periods of time to be used for reproductive purposes, so as to have semen available for use when the procedure requires it.

Patients decide to freeze their semen when they have already initiated or completed a treatment that may interfere with sperm production (such as chemotherapy or radiotherapy), when they may have problems with the semen quality at the time of cryopreservation, such as:

It is suggested to ask the treating physician about the best time to start the sample storage process, according to the treatment received to avoid negative effects on offspring.

How does the semen bank work?

To improve the possibility that spermatozoa survive the freezing process, semen is mixed with cryoprotectant substances and stored in liquid nitrogen at – 196 º C. However, not all sperm survive this process, and it can happen that very few or none of them survive to be used later.

The time that the sperm remain cryopreserved does not seem to affect its viability and does not increase the risk of fetal abnormalities as compared to a natural conception with fresh sperm. The storage time is extendable according to the needs of each individual or couple.

When to use the service of a semen bank?

The sperm bank allows to freeze sperm for long periods of time. This is done for the purpose of having spermatozoa available to be used later in an assisted reproduction insemination cycle, or for men who want to preserve their future fertility before undergoing procedures that affect their reproductive potential, such as pelvic or genitourinary system surgeries (vasectomy, prostatectomy, among others).

In addition, a person may use the sperm bank when:

What are the requirements to access the sperm bank?

If you need our service from the semen bank.