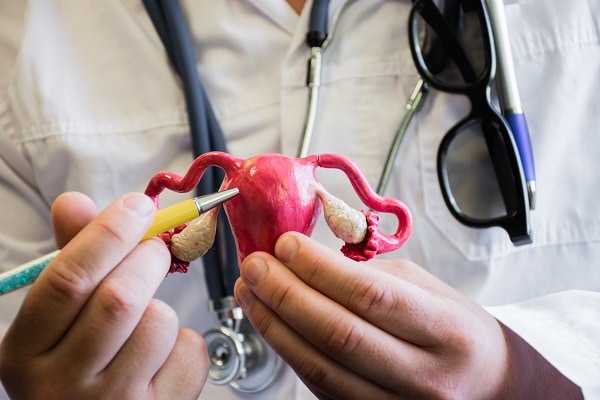 Endometriosis is a chronic disease that consists of the appearance of endometrial tissue in any anatomical location other than its natural location, which is the inner part of the uterus (endometrium). This endometrial tissue can grow anywhere in the human body. However, it occurs most frequently in the Fallopian tubes, ovaries, vagina, rectum and peritoneum.

The initial lesions are usually small and have a reddish appearance. However, over time they can take on a very different appearance, ranging from the formation of small scars, to growing disproportionately and forming chocolate-like cysts inside them.

It is common that endometriosis is accompanied by scars generated by the inflammatory reaction of the body trying to fight a tissue that is in a place where it does not belong. These scars form adhesions or abnormal bands of fibrous tissue which cause the pelvic tissues and organs to stick to each other, generating pain and functional limitations.

These lesions, together with secondary inflammation and adhesions, may cause symptoms such as severe pelvic pain, menstrual periods with severe pain (dysmenorrhea) or difficulty in achieving and sustaining a pregnancy.

It is important to clarify that this is a benign disease and is not related to cancer or any other type of neoplastic disease.  It is, however, one of the most frequent causes of pelvic pain and infertility. Therefore, it is important to detect it at an early stage and treat it in a proper manner. The treatment is to avoid complications related to the compromised organs, alterations in the quality of life of patients, as well as the interference it may generate to achieve a natural gestation.

Who is affected by this disease and how does it occur?

Endometriosis occurs mainly in young women who are in the reproductive stage of their lives and it can affect 10% to 15% of women in this age range. It can also be found in approximately half of the women who have difficulty achieving pregnancy spontaneously.

The exact cause is unknown; however, we do know that there are some genetic and hereditary factors that put certain women at risk of developing this disease.

There are many theories about its exact cause. However, it seems that one of the most accurate is the retrograde flow of menstrual bleeding; in other words, the material that was supposed to be expelled through the vaginal canal returns through the Fallopian tubes and reaches the abdominal cavity and the internal pelvic organs.

It should be made clear that many women present this retrograde flow of menstrual bleeding but only a few develop the disease because the body normally has the immunological resources to eliminate the small amounts of endometrium that fall into the pelvis. Some women have an immune system that is prone to produce increased inflammation and therefore endometrial focal points are not eliminated. Instead, the inflammatory changes that accompany endometriosis develop.

It is also important to know that endometriosis depends on estrogen production. Although estrogens produced in the ovaries are necessary for many of a woman’s normal bodily functions, they are also the source of endometrial growth and therefore endometriosis.

What are the most common symptoms of Endometriosis?

The main symptom that a woman with endometriosis may have is severe pelvic pain. This pain becomes stronger during the menstrual period and during sexual intercourse, but it can also manifest itself with pain in the rectum, bladder, back and extremities. However, in many women the first sign is the difficulty in achieving pregnancy spontaneously.

It is important to know that not all women with these symptoms have endometriosis, but it should be among the main diagnostic options.

How is the diagnosis of Endometriosis made?

Diagnosing this disease is not easy and, on many occasions, it is necessary to perform invasive procedures to confirm its presence.

The first indication of the disease is given by the symptoms reported by the patient, supported by a complete gynecological examination, which in patients with the disease can be more uncomfortable and painful than normal.

It is necessary to have an ultrasound examination, preferably transvaginal, to detect lesions caused by endometriosis, such as cysts or organ retractions.  However, endometriosis frequently generates small lesions that are not detected by this examination.

The ideal method for diagnosing endometriosis is laparoscopy. This procedure consists of introducing a camera through the navel and insufflating the abdomen with a gas (CO2), in order to directly observe the abdominal cavity and the pelvic organs. This not only enables the physician to diagnose the disease, but also to treat or remove the lesions that are found at that time, such as red or black spots of the disease, ovarian cysts or adhesions release.

In most cases, laparoscopy is sufficient to make a proper diagnosis of endometriosis, but in certain cases, it is necessary to take samples of abdominal tissue that may look apparently  healthy, to send it to the pathology laboratory to confirm the presence or absence of the disease.

What is the treatment for Endometriosis?

The treatment can be divided into 2 main groups:

Women with a desire to become pregnant:

In this case treatment depends on the severity of the disease and how much of  the pelvic organ is affected.  As a first step, it is advisable to perform a diagnostic and/or operative laparoscopy, to confirm the presence of the disease and treat the lesions found during the procedure.

Depending on the type of condition and to what degree it is involved in the reproductive system, treatments can be performed to achieve pregnancy. They range from considerably basic treatments such as ovarian stimulation to ensure ovulation, to treatments involving gamete manipulation such as in vitro fertilization, when the involvement of the endometriosis is greater.

The type of treatment also depends on the woman’s age. The older the woman, the lower her fertility and the more prolonged her exposure to the disease. In patients diagnosed with endometriosis, the recommendation is to seek pregnancy at an early age or at least not to postpone pregnancy for too long. Age and the disease’s evolution period are factors that most hinder the achievement of pregnancy.

In all cases it is necessary to evaluate the quality of the partner’s sperm to choose the most appropriate and effective treatment.

Women with no desire for pregnancy:

In this case the treatment is focused on improving the symptoms produced by the disease and preventing the progression of the lesions. Besides laparoscopy as the main procedure, if no immediate pregnancy plans exist, the use of hormonal drugs is recommended, the main goal of which is to block the harmful effect of estrogens.

These medications can be oral contraceptives (preferably with progesterone compounds), injectable medications, hormone blockers and even some that induce a kind of “menopause”, which are intended to reduce symptoms and prevent progression of the disease, although they often have side effects.

More recently, an intrauterine device has been used that releases hormones (progesterone) in a time release manner, is comfortable to use, effective and has few side effects.

Pregnancy is the best natural treatment for endometriosis, due to the protective effect it exerts over the adverse effects of estrogens; it substantially improves the symptoms caused by the disease and in many cases returns the pelvic organs to their normal function.

Endometriosis is a disease that accompanies women during their reproductive life and they can sometimes be affected even after menopause. Hence the great importance of diagnosis and treatment.